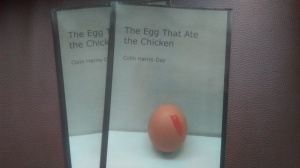 My second poetry collection, The Egg That Ate the Chicken, is out now and available to buy here from Lulu. It will be available worldwide via Amazon, Barnes and Noble and in all good book shops in about six to eight weeks.

It’s more wide-ranging and accessible than Culture 99/01, so if you’ve been sitting on the fence, why not give this one a go?

This is what I do. Even if you buy just one of my books, it is worth everything to me. I appreciate the support immensely.

My first chapbook is now published and is available to buy right now here at Lulu.com. It will also be available on Amazon and Barnes and Noble in about six to eight weeks time. An e-book version will appear too at some point (once I know what I’m doing).

This is something of a re-release of sorts. I wrote these poems back in 2001, and self-published them in a very short-lived run of about ten off the back of my home printer. I’m very proud of them. They were the first poems that I felt had a true and consistent voice of my own to them and I’m happy to see them in print properly as I’ve always wanted them to be.

It’s a short book, but I’m just getting started and there are larger books to come.

So, if you think this is something you might like, please buy a copy. Any support for what I do is appreciated more than you can know.

Below is a couple of poems from the book so you can get an idea of what it’s like.

has a way with a baseball cap

Kylie in a bath

shadow on a floor

plenty of martial arts thrown in

that way survived a grimmer past

Looking for something specific?